For the second year in a row, Price’s Alarms has been awarded the GE/Interlogix Dealer of the Year award for 2012. The award was announced in May of 2013 at the Interlogix dealer conference in Palm Springs. 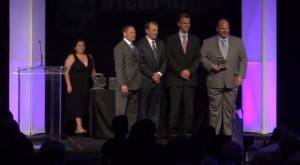 working hard making sure the switch over to our brand new ULC monitoring station went perfectly. Omer Bubica (Territory Manager – Western Canada for Interlogix) accepted the award on our behalf.

Bob Price, President of Price’s Alarms, said that the award came along with perfect timing. “Our management team has been working very hard for years in developing a brand new ULC monitoring station to replace the one that we’ve been using for more than a decade.” The award was announced to us a few days after cutting over the station and our team was finally able to catch some breath after many months of many people working extremely hard. “So it felt like topping on the cake for us to win this award.”

Announcement of Dealer of the Year Award 2012

We are very excited about the future of our business in British Columbia. Our new ULC monitoring station and head office in Victoria BC have been joined together and we are ready for expansion, growth and new technologies as a part of that future. We are proud to be named Dealer of the Year again and look forward to serving BC customers for many more years to come.